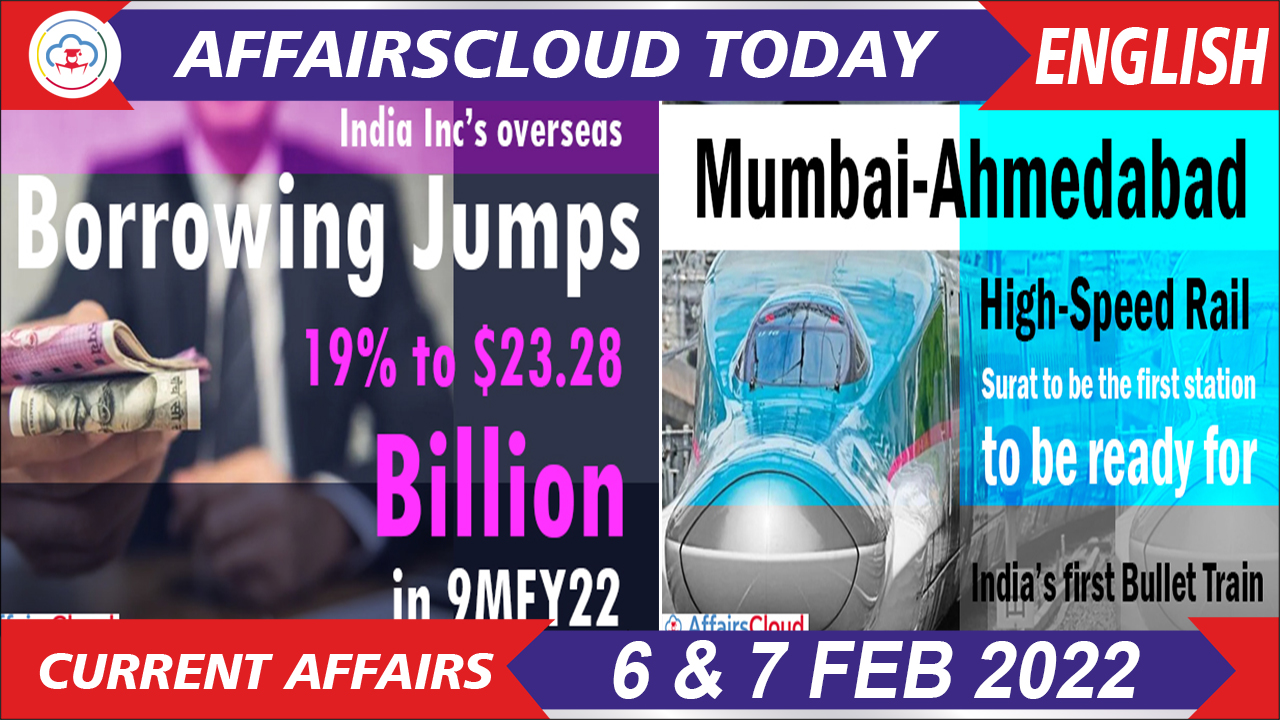 We are here for you to provide the important Recent and Latest Current Affairs 6 & 7 February 2022, which have unique updates of Latest Current Affairs 2021 events from all newspapers such as The Hindu, The Economic Times, PIB, Times of India, PTI, Indian Express, Business Standard and all Government official websites.

Our Current Affairs January 2022 events will help you to get more marks in Banking, Insurance, SSC, Railways, UPSC, CLAT and all State Government Exams. Also, try our Latest Current Affairs Quiz and Monthly Current Affairs 2021 PDF which will be a pedestrian to crack your exams. 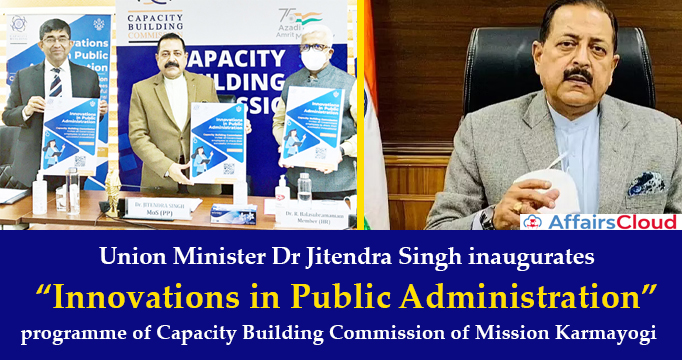 ii.The Selected Innovators will have the opportunity to showcase their leadership, creativity and initiatives to enhance governance and public service delivery in the Annual Health of Civil Services Report. About MAHSR Corridor:
i.The construction of the first Bullet train in India, which will connect Ahmedabad and Mumbai, has began in September 2017.
ii.The 508 Km long high speed rail corridor build with the support of Japan, is expected to be completed by 2022.
iii.The train will operate at a speed of 320kmph and 350 km per hour is the Maximum Design Speed- of the train.
Note:
i.The bullet train will reduce the travel time between Mumbai and Ahmedabad from 7-8 hours to 2-3 hours.
ii.India’s first bullet train will operate between Surat and Bilimora in 2026.
Land acquisitions:
i.As of 2022, the Railway ministry has acquired 98.62% land (941.13 Ha out of 954.28 Ha) has been acquired in Gujarat, complete acquisition of 7.90 Ha land in Dadra and Nagar Haveli Union Territory, 56.39% land (244.63 Ha out of 433.82 Ha) has been acquired from Maharashtra.
ii.This includes 925 Ha of private land. 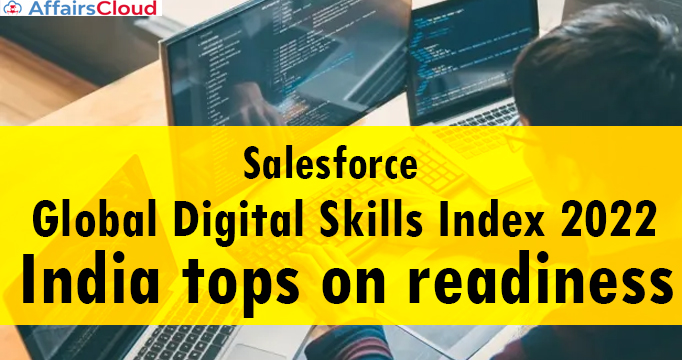 Salesforce, a leading player in Customer Relationship Management (CRM), published the 2022 Global Digital Skills Index which highlights the growing global digital skills crisis and the need for action. India has scored 63 out of 100, leads the digital skills readiness and has the highest readiness index among the 19 counties.
The average global readiness score was 33 out of 100.
About 2022 Global Digital Skills Index:
i.The 2022 Global Digital Skills Index, is based on a survey on around 23000 workers across 19 countries about digital skills, including their impact on the future of work, concerns about job readiness, and the significance of continuous learning.
ii.Three major skills gaps identified in the 2022 global index are: The everyday skills gap, The generational skills gap, and The leadership a
>> Read Full News 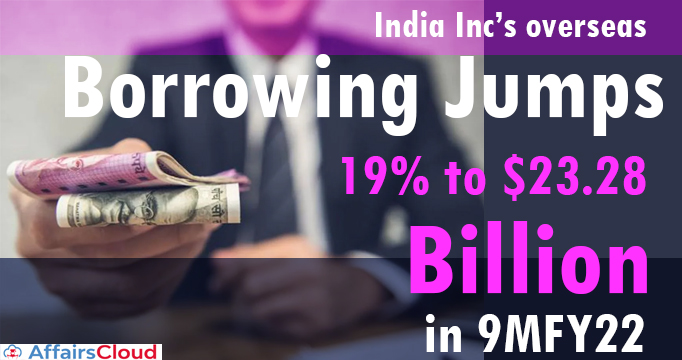 According to the Reserve Bank of India (RBI) data, the overseas borrowings of Indian companies stood at USD 23.28 billion in the first 3 quarters of the FY22 (April, 2021 -December, 2021) as against USD 19.53 billion during FY21 (April-December, 2020) and had jumped over 19 percent in the first nine months of the current fiscal (9MFY22).
About External Commercial Borrowings (ECB):
An external commercial borrowing (ECB) refers to the loans taken from non-resident lenders i.e. the foreign companies with a minimum average maturity (3 years) which can be availed through the automatic or the approval route. 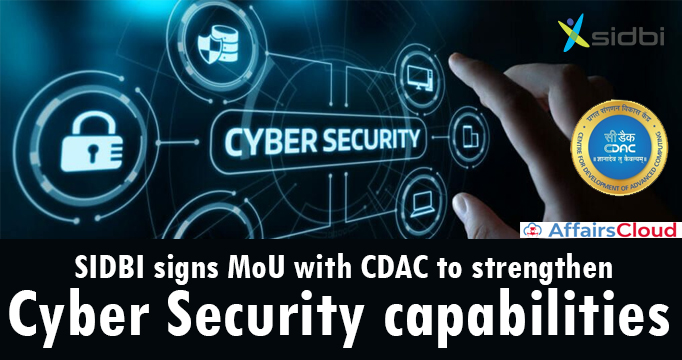 Small Industries Development Bank of India (SIDBI) signed a Memorandum of Understanding (MoU) with the Centre for Development of Advanced Computing (C-DAC), a premier R&D organization under the Ministry of Electronics and Information Technology (MeitY), to boost collaboration in Cyber Security and Allied sectors.
What is in the MoU?
Under the agreement both SIDBI and C-DAC will collaborate to explore innovation and use of emerging technologies in the areas of Cyber Security, AI (Artificial Intelligence), block chain, etc. and related training and capacity building aspects in the Banking Sector.
Note – In August 2021, SIDBI launched ‘Digital Prayaas’ an app-based digital lending platform to facilitate loans to entrepreneurs from low-income groups.
Signatories:
The agreement was  signed between Sudatta Mandal, Deputy Managing Director, SIDBI, and Magesh E, Executive Director, C-DAC.
About Small Industries Development Bank of India (SIDBI):
It acts as the Principal Financial Institution for Promotion, Financing and Development of the Micro, Small and Medium Enterprise (MSME) sector.
Headquarters- Lucknow, Uttar Pradesh
Chairman & MD- Sivasubramanian Ramann
Founded- 2nd April 1990 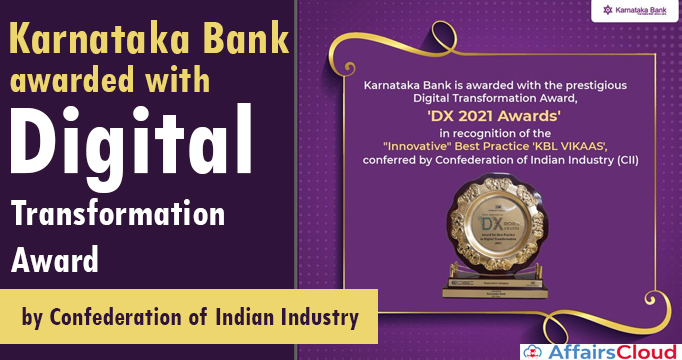 The Public Enterprises Selection Board (PESB) panel has recommended the name of Capt. Binesh Kumar Tyagi (BK Tyagi) to be the next Chairman & Managing Director (CMD) of Shipping Corporation of India (SCI), a PSU (Public Sector Undertaking) under the Ministry of Ports, Shipping and Waterways. IndiGo (InterGlobe Aviation Ltd), an Indian low-cost airline, has appointed its co-founder and promoter Rahul Bhatia as the new Managing Director (MD) of IndiGo with immediate effect for a period of 5 years.

Key Points:
As the MD, Rahul Bhatia, will oversee all the aspects of the airline and lead the management team.
Rahul Bhatia will aim to transform and focus on expanding IndiGo’s presence in India and in international markets and building for the long term.
About Rahul Bhatia:
i.Rahul Bhatia is the non-executive Vice Chairman of InterGlobe Enterprises.
ii.He established InterGlobe Enterprises in 1989 with its flagship business of Air Transport Management.
About IndiGo (InterGlobe Aviation Ltd):
CEO– Ronojoy Dutta
Headquarters- Gurugram, Haryana On 4 February 2022, the  Vice-Chancellor (VC) of Jawaharlal Nehru University (JNU), Mamidala Jagadesh Kumar was appointed as the Chairperson of the University Grants Commission (UGC). He is appointed for a period of five years (2022-2027), or until he turns 65, whichever is earlier.

i.Jagadesh Kumar successfully completed his five-year term as VC of JNU, which ended in January 2021, but he was asked to stay on till a successor is picked.
ii.He is a graduate of IIT(Indian Institute of Technology) Madras (Chennai), Tamil Nadu.
iii.He also served  as professor in IIT-Delhi’s Department of Electrical Engineering.

About University Grants Commission (UGC):
i.In 1944, the Sargeant Report, for the first time proposed the formation of a National system of education in India.
ii.In 1948, the University Education Commission under the Chairmanship of Dr. S Radhakrishnan recommended the formation of UGC.
iii.The Commission provides recognition to universities in India and disburses funds for development of such recognised universities and colleges.
Established – 1956
Headquarters- New Delhi, Delhi
Six  regional offices- Bengaluru, Bhopal, Guwahati, Hyderabad, Kolkata and Pune.
source- 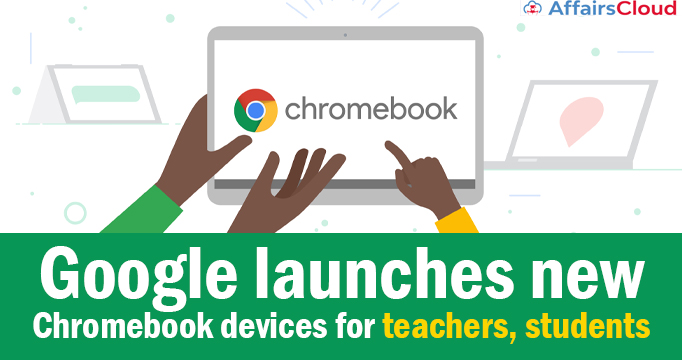 Google has introduced a new line of secure and sustainable Chromebook devices for education. The devices with updated programmes, resources and Chrome OS, advances will play a major role in the classroom and support 50 million students and teachers to learn and collaborate from any location.

NASA Plans to Deorbit ISS into Pacific Ocean in 2031 According to The National Aeronautics and Space Administration (NASA), the International Space Station (ISS), launched in 1998 will deorbit in January 2031 that drops into the most remotest point in the Pacific Ocean in 2031. ISS will continue its operations till 2030.